Reigning champions AC Milan has lost without defeat after six league games on the field of Lazio, which is now third in Serie A and is within one point of the Milanese. It became a painful 4-0. Leader Napoli has a twelve point lead. Who still loves the Neapolitans the title?

Milan has four Belgians in the squad, but none of them started in the base. After barely four minutes, Milinkovic-Savic (ex-Genk) opened the score for home team Lazio.

Zaccagni made it 2-0 in the first half. Milan proved too vulnerable defensively and was unable to make a fist himself.

Early in the second half, three Belgians were allowed to enter AC Milan at the same time: De Ketelaere, Saelemaekers and Origi. Alexis Saelemaekers made himself noticed with a lob ball in the small rectangle, on which Leao came in, but Lazio defender Hysaj prevented the goal.

In the end, the input of the three Belgians would change little in the course of the match. After 67 minutes the game was all over when Luis Alberto made it 3-0 from the spot. The Spaniard brought in the 4-0 moments later, finished by Felipe Anderson.

VIDEO. Jong Genk has lost the red lantern thanks to this great goal by 17-year-old Mika Godts

Caicedo versus Tielemans — © Action Images via Reuters Last year he caused a furore at the Kiel,…
Read More 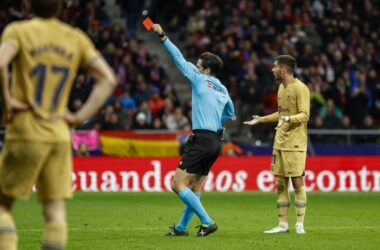 Barcelona only becomes leader in La Liga after a narrow victory in the top match at Atlético Madrid, both teams end with ten after a riot in the slot

Barcelona can only call itself leader in La Liga. The Catalans took full advantage of Real Madrid’s defeat…
Read More

© PA White smoke for Leandro Trossard (28). The Red Devil leaves Brighton, where he had fallen from…
Read More