28 points from Ferdinand Zylka are not enough for Circus Brussels: “I don’t think we can blame the newcomers”

After a strong first quarter, Circus Brussels underwent the law of the strongest in Hasselt on Thursday evening. Limburg United won 102-81. The German shooting guard Ferdinand Zylka basketed 28 points, but received too little support. DJ Laster also made a great debut. New chance to win against Antwerp Giants on Sunday for their own people.

Brussels had traveled to Hasselt without the injured Terry Deroover, Jaylin Airington and Domo Proleta. DJ Laster was on the field for half an hour on his debut and was good for sixteen points, four rebounds and two assists. “I saw my buddies at work at Charleroi and I had been training for a week,” said the American newcomer. “I quickly pick up on the automatisms.”

Jordan Skipper-Brown made a hopeful debut at Charleroi last week, but had an off day against Limburg United. Ferdinand Zylka came out strong, but only received offensive support from DJ Laster and Louis Hazard. 24-year-old Zylka stood up for the newcomers. “DJ Laster made a great debut”, said the German. “If he can continue this form, DJ will be a great added value. Skipper-Brown had a slightly more difficult time, but still brought energy to the team. I don’t think we can blame the newcomers. They tried their best, but were thrown to the lions. They still have to get used to the teammates and feel how strict the arbitration is. The fact that we defended too weakly was a collective problem. When you take a century, you know you didn’t work well defensively.”

Zylka pulls up to victory against Leuven Bears. “We have to draw a line under Limburg United and focus on Sunday’s home game against Antwerp Giants. We have to handle it like we did against Leuven Bears. At Charleroi we did it perfectly for 35 minutes, but then the spring broke. Somehow that made sense, we could only rotate with seven players. This week we were never training with ten. The newcomers can hardly learn the plays if you can’t train five out of five. Once we are complete, we are talking about a different story.”

Out of the comfort zone

Despite the many defeats, the German feels good in his skin in our capital. “I was recruited as leader and finisher of the team and for the time being I am fulfilling that role through trial and error. I wanted to work abroad and step out of my comfort zone, Brussels gave me that opportunity. The difference with the Bundesliga is big because the budgets there are of a different order. However, I played in the second Bundesliga and then Brussels is a step forward.”

Boston is on a roll in NBA and takes another victory thanks to strong Tatum, Ja Morant unleashes a spectacular dunk in victory over Memphis

©  Getty Images via AFP Boston continues to be unfazed in the NBA. The Celtics won 106-122 at…
Read More

Sacrifice for Kangaroos Mechelen: top scorer and candidate MVP Brian Fobbs out for months with a torn Achilles tendon

Brain Fobbs had to leave the parquet on crutches on Saturday. He has to go under the knife…
Read More 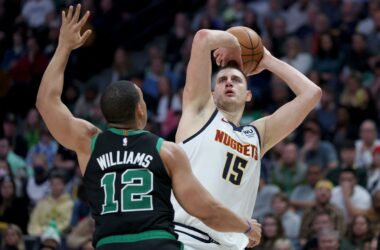 With the home team, the leading role was once again reserved for two-time MVP Nikola Jokic. With thirty…
Read More