Another football player in jail? Karim Benzema could face 5 years in prison for sex tape extortion

Karim Benzema is due to appear in court in France today (October 20) for an extortion case. The Real Madrid striker is accused of extorting his compatriot Mathieu Valbuena with a sex video of the latter. Spicy! Lucas Hernández and Benjamin Mendy are already in trouble. Does Benz also growl?

A friend of Benzema allegedly blackmailed Valbuena with a sex video in 2015. The Real Madrid striker would then have tipped Valbuena to pay the claimed amount of allegedly 150,000 euros. Benzema, 33, has always denied his involvement. Big Benz risks a prison sentence of up to 5 years and a fine of 75,000 euros.

Deal
But what about that sex tape? Valbuena says he received a call in June 2015. A man offered him a deal: pay, otherwise the tape would appear on the Internet. That tape is relatively innocent by the way: Valbuena has sex with his regular girlfriend (and not with a bunch of Russian whores or minors or whatever). But of course it wasn’t nice.

childhood friend
Valbuena called the police. A police commissioner was appointed as an intermediary to negotiate with the man behind the call. This is how the police found one of the people involved. One Karim Zenati. That’s a childhood friend of Benzema’s. The police intercepted a telephone conversation between the two Karims. Benzema says, “Valbuena doesn’t take us seriously”. The word ‘us’ was very suspicious to the detectives.

Hello everyone ! For @franceinfo, I am at the court of Versailles today. Karim Benzema and four other defendants appear there in the case of the “sextape” of Mathieu Valbuena pic.twitter.com/oB0j6A8kYw

Northeast Cup 2022 LIVE: See how to watch it on TV and Online

Five reasons for Ajax’s display of power against Dortmund: from 37-year-old goalkeeper to challenging Thomas Meunier Real Sociedad vs Manchester United: where to watch live with images 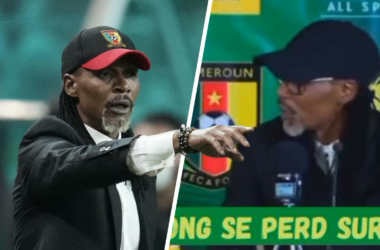 VIDEO. Hallucinant: Cameroonian national coach can’t pronounce the name of the player he takes to the World Cup

Avaí vs Atlético/GO live and online: see where to watch, lineup and predictions

Avaí vs Atlético/GO: where to watch live and online, lineup, history and predictions PUBLICITY Learn how to watch…
Read More