Simon Mignolet is looking forward to duel against Manchester City: “Kevin De Bruyne also knows it will be difficult”

Matchday 3 in the Champions League, and for the star ensemble of Pep Guardiola and Kevin De Bruyne it is a must. Simon Mignolet also realizes that, who expects City in full force is about to kick off. “Because we took four out of six, they will approach the match differently.”

PSG on one, Club Brugge on two, City on three. That is the score after two match days in group A. No one gave a cent for the chances of blue-black at the end of August. Not that the Citizens going down to Jan Breydel with the knife at his throat, but losing is really out of the question. Dias and Grealish – the man of 100 million euros – among others, remained on the bench against Burnley on Saturday. A sign on the wall that Guardiola takes blue-black seriously. “That is only logical,” says Mignolet. “After our performance in Europe, they will appreciate us a little more. City approach the game differently now that we have achieved four out of six than with roughly zero out of six. I have talked about it with Kevin De Bruyne in recent weeks: he also knows that it will be a difficult match. You can bet that they don’t like to come to Jan Breydel at the moment. But there will be no underestimation.”

Gone are the days when they collectively swooned at Olympia when a few world stars walked on the field. In Europe, Clement’s team has become self-supporting. Limit the damage? Forget it. “If we draw up and implement our plan, we certainly don’t stand a chance”, Mignolet shrugs. “Of course we fight with unequal weapons. Manchester City are the strongest footballing team in our group. They also have to win. But we want to get a result. If we believe in our own qualities, we should be able to do that.”

Do not think too much, but play: according to Mignolet, that is the motto. “The pressure is on City. If we play free and free, maybe we can take advantage of that. Faith and trust are there anyway. After the win against Kortrijk, we can look forward to a beautiful European evening with peace of mind.”

In that sense, Friday’s easy win and clean sheet was a positive start. It didn’t surprise Mignolet that just Vormer – now a bench seat in the Champions League – made the difference. Tomorrow with Vormer or not? The goalkeeper doesn’t want to turn it into a polemic. “Ruud is just as important to us as he was two weeks ago. Can we still put him on the bench? Luckily I don’t have to make that decision. He is and remains our captain. And even if he is not on the field for a second, in the dressing room he will always make the difference.” (jve)

| Goal! Memphis scores a penalty against Cillessen at Barcelona-Villarreal

Where to watch América x Palmeiras, for the Brasileirão Serie A 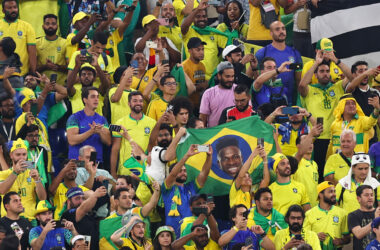 ? | Comedian reveals fake fans in Qatar: ‘I actually like cricket, not football’

Australian comedian Jon-Bernard Kairouz has made a video about what he calls ‘fake fans’ in Qatar. He says…
Read More

How many goals did Neymar score in his career?

See how many goals the striker has scored in his career, so far, for PSG, Barcelona, ​​Santos and…
Read More