Flamengo has lived a great moment since the arrival of Renato Gaúcho. The team won the 4 games in charge of the coach and comes from 3 consecutive routs. But, in the last two matches, the improvement in the team’s numbers after the departure of Everton Ribeiro stands out. On both occasions, the midfielder was substituted before the 20th minute of the second half and Mais Querido started to swing the net. In all, of the 9 goals scored, 8 were without the shirt 7 on the field.

Everton Ribeiro played a total of 127 minutes, counting the additions of the first stages, in the matches against Defensa y Justicia and São Paulo. For Libertadores, the midfielder left at 18 of the second half, with the game in 1 to 1. In the Brasileirão, it was at 15, with Flamengo losing by 1 to 0. Both occasions were for Michael’s entry. That is, with him on the field, the team lost 2-1 in the aggregate of the two matches.

Already without Everton Ribeiro, the team played for 70 minutes – counting the additions. In total, after the midfielder left, the team scored 3 goals against Defensa y Justicia and 5 against São Paulo. So, in the aggregate of the two games, even with almost half the time, Flamengo scored 8-0 in the absence of the midfielder.

Also, Michael came in very well in both games. Against Defensa y Justicia, the striker directly participated in two goals, one with a beautiful shot that hit the crossbar and Arrascaeta scored on the rebound and, in the other, began the move of the last goal. Against São Paulo, they made the moves that resulted in corners of the first and third goals, in addition to having divided the ball from the last one, against Wellington.

Vitinho was another reserve who did well on both occasions. The striker, who played in the field strip that Everton Ribeiro plays, scored twice against Defensa y Justicia and directly participated in the 4th and 5th goals against São Paulo.

It is worth noting that Everton Ribeiro has not scored any goals for Flamengo in 22 games this season and many fans have been criticizing his performances. On the other hand, the midfielder has already played a great game in command of Renato Gaúcho. In the 5-0 rout over Bahia, the 7 shirt gave a nice assist and commanded the midfield alongside Arrascaeta.

What a stunt! 3X3 Lions to semi-finals thanks to decisive point ‘at the buzzer’ and Latvian victory against the Netherlands

Heat not to do on Olympic tennis court: ‘If I continue here, I will die’ Borussia Monchengladbach vs Stuttgart: where to watch live with images and lineups 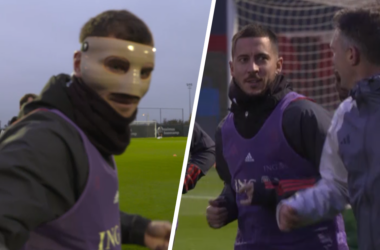 Red Devils with barely ten field players at first training, Thomas Meunier goes to the World Cup with a striking mask after a fractured cheekbone

The Red Devils trained for the first time in the run-up to the World Cup in Qatar. On…
Read More

Louis van Gaal lashes out at FIFA: “It’s ridiculous that the World Cup is in Qatar, it’s about money”

©  ISOPIX Louis van Gaal thinks it is “ridiculous” that the World Cup is being organized in Qatar.…
Read More