Our compatriot Joachim Gérard beat Briton Gordon Reid on Sunday in the wheelchair tennis final at Wimbledon. For Gérard it is his second Grand Slam title. After an hour and 44 minutes the final score was 6-2, 7-6 (7/2) on the board of court 3 in the All England Club.

It is his second singles Grand Slam title for 32-year-old Gérard. Earlier this season, the Brussels native already won the Australian Open. He reached the final at Wimbledon this year for the first time in four participations.

Gérard also played the final of the doubles on Saturday. He lost on the side of the Dutchman Tom Egberink 7-5 and 6-2 to Gordon Reid and Alfie Hewett. He grabbed next to a second double title in a row in London. In 2019 he won the tournament with the Swede Stefan Olsson. There was no tennis in 2020 due to the corona pandemic. The Australian Open (in 2017 and 2019) and Roland Garros (in 2014) are also on his honors list.

Joachim Gérard: “This victory will have a lot of resonance”

“I love this tournament so much. It hurt not to be able to come last year. This year I wanted to do my best because last time it wasn’t so good (first round in 2019, ed.). And look, this was my best”, Gérard laughed as he presented his trophy on court three of the All England Club. The 32-year-old from Brussels paid tribute to his team and the public in his acceptance speech. “Of course you support the British, I fully understand that,” he said again.

Gérard also won the Australian Open earlier this season. Now he is adding a second singles Grand Slam title with Wimbledon. Unfortunately, that happened without Belgian fans in the stands. “Without covid they would have been here. This victory will have a lot of resonance in Belgium. I know I have a lot of support there,” said Gérard. When asked where he places his Wimbledon title, Gérard replied: “I value all my victories equally. This is obviously a grand slam, but even my bronze medal in Rio is on the same level. I hope to achieve such a performance often.”

Gérard has no intention of resting on his laurels in any case. “My goal is to try to be number 1 and stay that way for as long as possible. I would jump to third, but number two Alfie (Hewett) has a big lead. But I’m going to try to keep climbing in the standings. For that I have to perform constantly and not have three good tournaments followed by three bad ones. I will have to make progress in that area.”

His next goal will be the Paralympics in Tokyo. Five years ago, he took bronze in Rio. “I’m going for gold, that’s for sure. The Games are an athlete’s dream. The first dream is to participate, the second is to get a medal and the third is gold. I was very happy to get bronze in Rio, despite the disappointment after my loss in the semi-finals. In Tokyo I want to do better. But many athletes want that precious medal.”

Twitter is looking forward to the European Championship final: pizza with beans, tea bags that are cut to pieces and Peaky Blinders 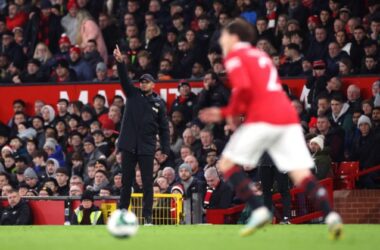 No stunt for Kompany: Burnley goes down at Man United in Carabao Cup

Emma Meesseman has qualified with Ekaterinburg for the final of the Russian play-offs (PBL). Meesseman (12 points, 3…
Read More Where to watch Bayer Leverkusen vs Stuttgart live, online and lineups