After a 5-1 win (including a goal from Lukaku) on the last day of Serie A, the time had come for Inter. Afterwards it was finally allowed to show off the trophy. Besides joy, Romelu Lukaku also showed tears. Afterwards it became clear why. His fellow Red Devil Youri Tielemans also did not keep it dry after the last match day at Leicester.

READ ALSO. Romelu Lukaku ends the season with a goal, but the way was really not the intention this time

“I didn’t want to cry today, but I thought a lot about my grandparents today,” said the Red Devil afterwards, who also wore a T-shirt with a picture of his grandparents. “When my grandfather passed away in 2005, I promised him that one day I would win a big title for him. Now I have managed that, I am very proud of it. ”

Also striking: Lukaku took his son Romeo to the field after the match. Sign that it is a hugely important moment for him, as he normally deliberately keeps his son in the shade.

After the last game of the season at Leicester City, Youri Tielemans also did not keep it dry. The Foxes lost 2-4 to Tottenham Hotspur on Sunday and saw a Champions League ticket go up in smoke. After the game, however, Tielemans was also honored for his strong season. He was voted ‘Player of the Season’ by his fellow players and by the fans and was honored for this after the final match.

Tielemans received a badge of honor from his fellow players and a standing ovation from the fans present. Chairman Aiyawatt Srivaddhanaprabha presented the trophy. Tielemans was visibly emotional.

READ ALSO: Chelsea and Liverpool at the expense of Leicester to Champions League after sensational final match day

? | Verstappen is the leader in Monaco after this nice start

He couldn’t believe it himself: player from cult club Nottingham Forest makes an incredibly beautiful goal

For Jack Colback it has become an Easter Monday to remember. The 32-year-old player from Nottingham Forest scored…
Read More 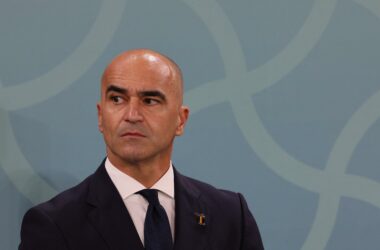 Roberto Martinez about his plans after Polish interest: “You never know what the future will bring”

Two weeks ago, Roberto Martinez’s elimination in the group stage at the World Cup in Qatar ended a…
Read More

Without the injured Romelu Lukaku and Michy Batshuayi, Spaniard gives Divock Origi another chance. In addition, there is…
Read More