For the men, the traditional clash in the volley is between Roeselare and Maaseik, but it had been since 2018 that both teams had faced each other in the final. After all, Aalst has always been a losing finalist in the past two years.

The first two sets were narrowly won by the West Flemish, in set three the Limburgers struck anyway. It turned out to be a brief flare-up, because in set four, Roeselare finally took over: due to a net error, the first match ball was immediately the right one.

For the West Flemish, it is the fourteenth Cup win in club history, which puts them on the same level as record holder Maaseik. They have had an excellent form in recent weeks, including two victories in the Champions League. In the EuroMillions Volley League they skipped Maaseik last weekend, ending the regular season as number one.

For the women, VC Oudegem and Asterix Avo Beveren will play the final on Sunday evening. Asterix has thirteen cups to his palmares (a record), Oudegem won the cup once (in 2013). Defending champion Hermes Oostende was already killed in the quarterfinals against Tchalou.

Asterix primus in the women

In the women’s category, Asterix AVO Beveren crowned herself the cup winner. The East Flemish team defeated VC Oudegem in the final in the Antwerp Lotto Arena in three sets: 27-25, 25-12 and 25-20.

Oudegem eliminated Tchalou in the semi-finals. Asterix AVO was too strong for VDK Gent. Last season, Asterix Avo, who also won the Cup in 2017 and 2018, was still a losing finalist. As Asterix Kieldrecht, the team previously won thirteen cups. Oudegem has already won the cup once, in 2013.

DISAPPOINT: Know the 5 big transfers that are disappointing the world this season 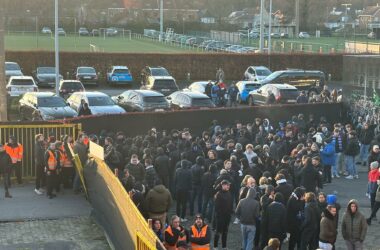 Angry Club fans wait for players and have a clear message for the Bruges board: “Hoefkens outside”

Eliminated in the cup against Sint-Truiden and lost points against OH Leuven. It’s not Club Brugge’s week. The…
Read More

©  AFP It’s months away from the next NBA Draft, when US basketball teams can pick from the…
Read More