No infections at OHL after a visit to Club Brugge

At OHL they had feared corona infections after their visit to the troubled Club Bruges last Monday, but everyone tested negative with the Leuven residents on Friday. Earlier in the week they had already done quick tests at OHL on their own initiative to get to know the impact of the match in Bruges, and there too the entire group had already tested negative. The men of Marc Brys will therefore play at full strength against Antwerp tonight, although the match will come just too early for Maertens and Aguemon, who are on their way back after an injury.

Brys saw a well-tempered group of players at training this week, despite the 3-0 defeat in Bruges. “We showed drive there, had good moments, let the ball go around well and continued to fight,” said the OHL coach. “Everyone came out of that game with a good feeling, despite the three goals against.”

? | UFC’er Paulo Costa so clamped for lost top fight: ‘could not sleep’

David Goffin rises one place after title in Montpellier, Elise Mertens has to give up one in the world ranking

Bergwijn helps food bank: ‘I don’t want children to go to school without food or drink’

Steven Bergwijn is back in the Netherlands. The attacker came over from Tottenham Hotspur this summer and signed…
Read More 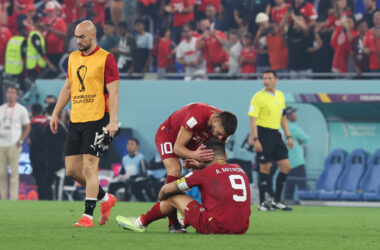 Ajax can again have access to the World Cup visitors this week. Because Dusan Tadic (Serbia), Mohammed Kudus…
Read More